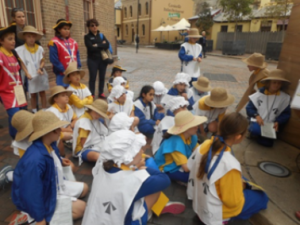 On a recent walking tour of the Rocks, Sydney, Year Four students retraced the footsteps of the early Australian settlers and convicts. With a focus on the First Settlement and the early colony, students were dressed in characters portraying various people that formed the early arrivals in 1788 and beyond-from Captain Arthur Phillip, Francis Greenway, John Cadman, James Ruse and many convicts and free settlers.

The experience was highly relevant to our studies in History and the class responded well.

We would like to thank our parent who helped with the excursion.